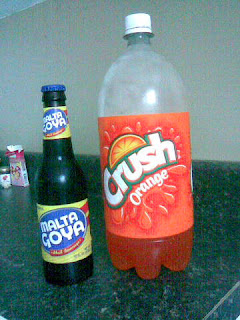 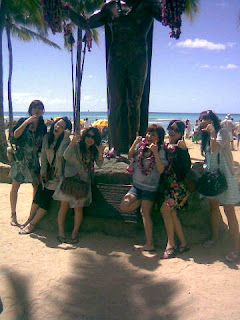 My lei for Duke 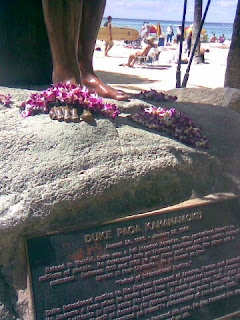 Obama was here too! 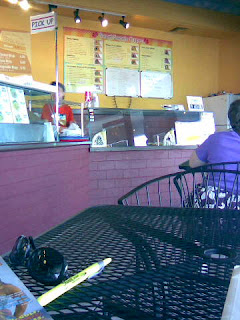 I need a longer board! 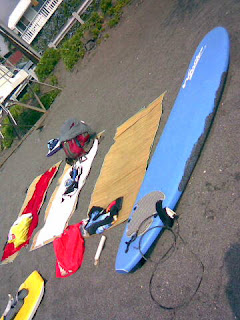 Shopping for the hike on Maui 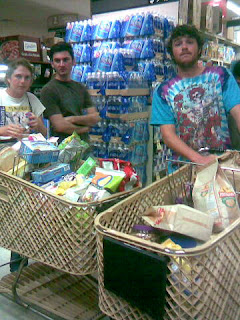 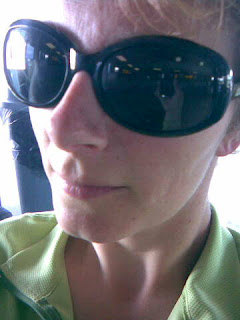 Swell in the classroom 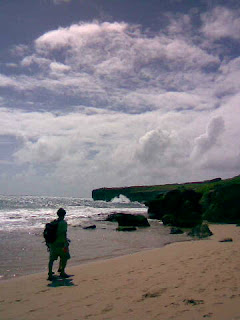 One of the botanical garden inhabitants 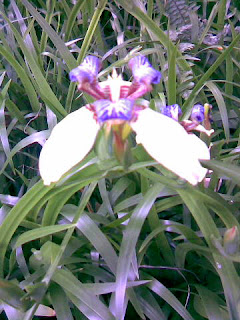 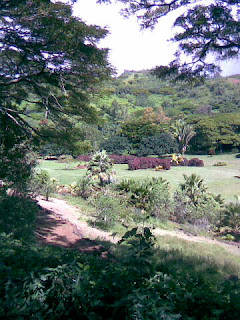 Waimea Canyon, here we are! 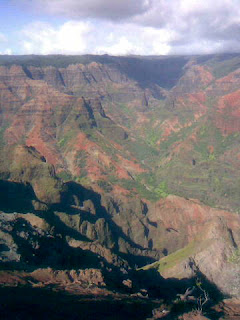 It's been a busy two weeks in Hawaii so far and no reason to think the next two won't be busy as well. So much fun! We've spent 3 nights camping out on the most active volcano on the planet, Kilauea, in Volcanoes National Park, and got a ride with some USGS volcanologists working on the active lava flows from the ongoing eruption. 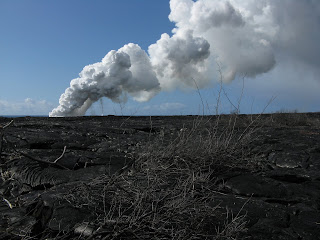 The "smoke" comes from glowing hot magma entering into the ocean and forming steam clouds. Spectacular stuff, let me tell you. 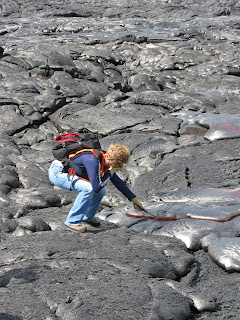 That would be yours truly, using the rock hammer to scoop up a little bit of magma for herself. The "fresh" magma is the very silvery, somewhat reddish stuff in the right and upper part of the picture, while I am standing on older stuff (i.e., a few days or weeks old). The "old" stuff wasn't exactly cold yet, and in places we could see the red glow under 5-10 cm of cooled crust. So, don't put your pack down, don't stand too long in the same place! The magma-scooping was by far the favorite activity of the students this day and all of us came away with a few singed hairs, since the red magma is ~1100°C and the surrounding air is not much cooler! See how the vulcanologist takes his sample:

(The quality is somewhat awful. As soon as I figured out how to convert the .MVI files from my camera into mpg's, I hope it improves).


But it wasn't all lava watching. We did some work on mapping plants on lava flows of different ages, trying to figure out about how and in what order plants colonize these new lava flows. We don't have any results yet, as this will be an ongoing project through the semester. 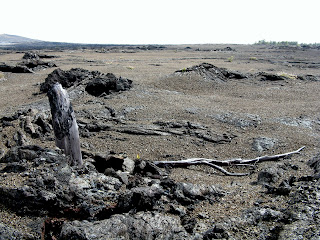 This is a brand-spankin' new lava flow, only about 50 years old... 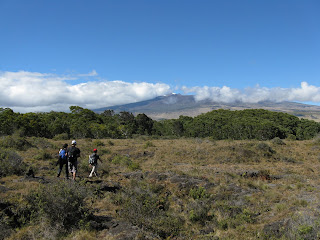 ...whereas here we are on much older stuff, probably some thousands, or even tens of thousands, of years old. This is at about 1200 m a.s.l. on the north side of Mauna Loa (meaning we're not in HVNP anymore). In the background you see the summit of Mauna Kea, often called the largest mountain in the world. 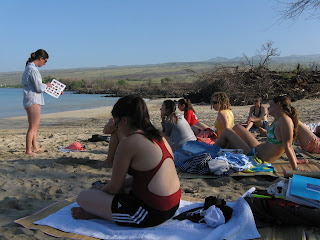 We also went snorkeling with our resident marine biologist (who unfortunately left us already...), here a picture of the students listening attentively to her telling about the corals and fish and other creatures they could expect to see out on the reef. Note how the sun is not very high in the sky - we beat the crowds and arrived at the beach at around 8:30am. On a Sunday! These students are pretty dedicated, I have to say.

Since taking that picture I have also managed to lose my camera. It seems like the Menehune (Icelandic equivalent = húsálfurinn) have borrowed it... at least a house-wide search party has been mobilized to no avail. Kinda sucks. But hey, next Tuesday we're all going to Kaua'i to hang out in Koke'e State Park and help the Hawaiians get rid of invasive species that are crowding out the local flora, and from there we'll go to Maui (where I've never been!) to learn about organic farming and, best of all in my humble opinion, about Haleakala Volcano, hiking across the crater in 2 days. I don't think we'll have any internet access while I'm on the trip so don't hold your breath for an update here, or an email, between Feb 10th and 19th.
Birt af Herdis kl. 2/04/2009 11:28:00 e.h. 2 ummæli:

Today has been an exercise in persistence/stubbornness, as far as I am concerned. I needed to set up the wireless on my laptop (connect it to the new wireless router at home) and so far, this seemingly simple task has taken me ~4 hours. The only result is that the wireless network adapter driver has somehow been uninstalled and I cannot install either a new or the old one. Fabulous results, eh?

So, now I've taken up residence in my personal IKEA heaven and am watching Pride and Prejudice on DVR. The Keira Knightly version. I am absolutely not proud of this performance of mine, btw, I intended to spend the day in the lab. Ehem... 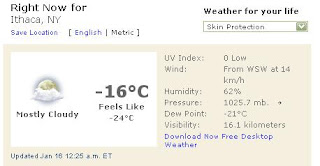 Djíses. Who'd have believed Christmas and the accompanying lethargy is over and we're safely in the New Year?!?!

It is truly amazing how coccon-ish Iceland is in the dead of winter. Especially with overcast sky and a population bedridden due to over-consumption of smoked lamb meat, pickled herring and umpteen different sorts of cookies and sweets. Today we have drizzling rain and fog, which isn't that different from what it's been like for about a week now.

And during that past week I seemed to have misplaced my ability to DO anything other than read Icelandic crime novels, eat loads of licorice and knit. And visit with friends and family (which is why one goes to Iceland in the first place), go out on the raz and have a hot dog "with everything", hunt for sold-out Icelandic novels and marvel at the sheer size of Reykjavik (the city of ~150 thousand souls that has a traffic infrastructure of a city of a million inhabitants and spreads over an area where a couple million more people could be easily accommodated. I think one would be hard pressed to call Icelanders normal). I did make a feeble attempt to get work done but fell asleep in front of the computer almost immediately.